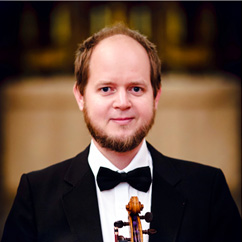 As a school boy in the Bournemouth area, Stefan was very involved in the local music scene, eventually leading the Bournemouth and Dorset Youth Orchestras, and the orchestra of “Gli Amici Della Musica”. Four years at Trinity College of Music in London followed. Within two weeks of leaving Trinity, he got a job with the Canadian based violin show “Barrage”. Four years later, he’d played with them in 16 countries on 4 continents. It was time to move onto new pastures, so he moved to New Zealand for 6 months, where he played with the Auckland Chamber Orchestra and several string quartets.

Back to Dorset in ‘05, and now enjoys a varied teaching and freelancer’s career. He’s played with many orchestras including the BSO, numerous string quartets, and currently leads the Westbourne Orchestra. Recording highlights include BRIT award single of the year Girls Aloud “The Promise”, Pet Shop Boys, Alesha Dixon and several CD’s with the BSO. His teaching website is here – www.bournemouth-violin-teacher.co.uk

Stefan is trying to get fit by running at the moment, but not enjoying it very much. He prefers hanging out with Becca and the two kids, camping, or doing some DIY around the house and garden. 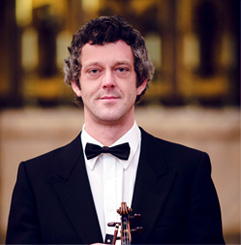 Piotr studied at Trinity College of Music in London, gaining an honours degree in violin performance. Piotr is a member of several String Quartets, and works with orchestras, choral societies, chamber groups, opera, and in musical theare.

He has performed at hundreds of functions and weddings, and recorded for various pop acts. With the Orion Trio he has performed on cruise ships around the world. He gives recitals and in recent years has performed all of the major violin concertos.

Piotr plays on a 1673 Andrea Guarneri violin, kindly on loan from Felicity Belfield. Piotr loves the outdoors – cycling, playing frisbee on the beach and camping. He’s pretty good at climbing trees too. 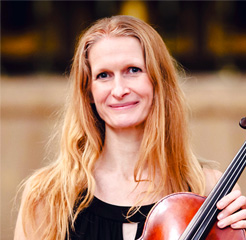 Becca grew up in Bournemouth and started playing the Viola aged 13, soon playing with the Bournemouth, Wessex and Dorset Youth Orchestras. She accepted a place at Guildhall School of Music, where she went on to gain her Bmus and Pdot. While at college, Becca built up many contacts, which opened up several different avenues for her freelancing career in London for the next 12 years. Highlights include touring Europe with bands such as “My Life Story” and “The Tindersticks”, performing on the BBC’s “Top of the Pops” with artists “Jamiroquai”, Gary Barlow and Chrissie Hynde, recording for artists such as George Michael, Kirsty McCall, Morrissey and Beth Orton, and playing live with Neil Diamond…. to name a few!

She also enjoyed writing for, and playing in some London based folk and country bands. She was leader of the Viola section of the London Pilharmonic Youth Orchestra and her Orchestral tours took her to Portugal and the USA. She also enjoyed touring the UK with the show “Timeless” (Suspect Culture Theatre Company), highlights including the Edinburgh Festival and “The Donmar Warehouse”.

Now that Becca has settled back in Bournemouth, she is kept very busy with her 2 children, her violin and viola teaching at 4 local schools, and as much chamber music and orchestral playing as time permits! Becca loves walking, camping and being in the great outdoors, and is an enthusiastic practitioner of yoga. 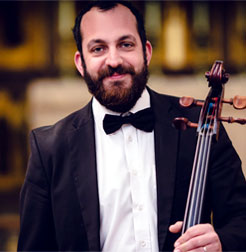 Nick Squires is a cellist, producer and string arranger. Alongside that, he is the Music Director/Producer for Fitsteps.co.uk.

He also teaches privately and coaches on Music Makers and The Oxford Cello School.

Nick has played on countless Hollywood film scores, and number ones, and arranges strings for acts like Boyzone, Blue, Girls Aloud and the X Factor.

Nick studied at the Royal College of Music and on graduating, played with all of the top London orchestras before getting bored with the politics of symphony orchestras.

After that, he joined pop band Jamie Scott and the Town, achieving a No. 1 hit in Asia and supporting Take That and Kelly Clarkson, as well as headlining festivals with One Republic.

Since leaving music college, he has regularly played the cello in the West End, in The Lion King, and as an associate dep for Wicked the musical. Now based in Bournemouth, Nick divides his time between studios in Surrey and London, and teaching in the Bournemouth area.